Welcome to a new post on Arabic. It has been five days since I started learning it and I have some updates. I finished studying the handwriting. It differs a little bit from the printed one but it was not hard to master. It’s mostly the same as the printed one, you just need to take in notice the starting point to finish at the line. Some letters have different positions so based on that the letter after it or behind it should be raised. The university prescribed us three books, one of them is a book on Arabic handwriting, which I finished two days ago. It feels good to finish a book even before the university started, that gives me a good base to start. The book is called “mastering Arabic script: a guide to handwriting.”

Yesterday I started learning the grammar from the second book, that the university prescribed us. This is how it looks like.

I like the book, but I don’t like everything being written in transliteration. That makes we want to look up the spelling with Arabic letters which takes up a lot of time. The grammar looks pretty straight forward for now. It had some parts in it which looked to me like Russian or Turkish grammar. For example in Russian “I am a student” literally translates to “I student (Я студент)”. And I was surprised to see that it is the same in Arabic. In Arabic you say: أنا طالب (ana tālib). However, the possession structures reminded me of Turkish. In Turkish you use suffixes after the noun to indicate possession. The same goes for Arabic. So for example in Turkish “name” is “adı”. To say ‘my name’ you add a “-m” suffix. So it becomes ‘adım’. In Arabic “name” is اسم (ism) and “my name” is اسمي (ismi). So an added “-i” makes it “my”. I’m excited to see what will come next. This was just from the first lesson of the book.

One more thing I am doing to get familiar with the script and language is to look up which words Arabic has in common with Turkish. Then I look up how to write them in Arabic and practice my handwriting. I know the meaning and the pronunciation of these words, which makes it easy to learn these words. I see which sounds correspond to which letters by writing them down .

So to summarize everything I’m still feeling confident just as last time. Let’s see what will come next. 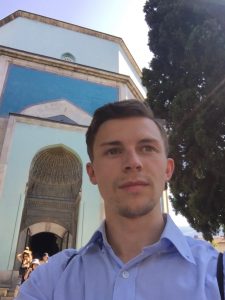